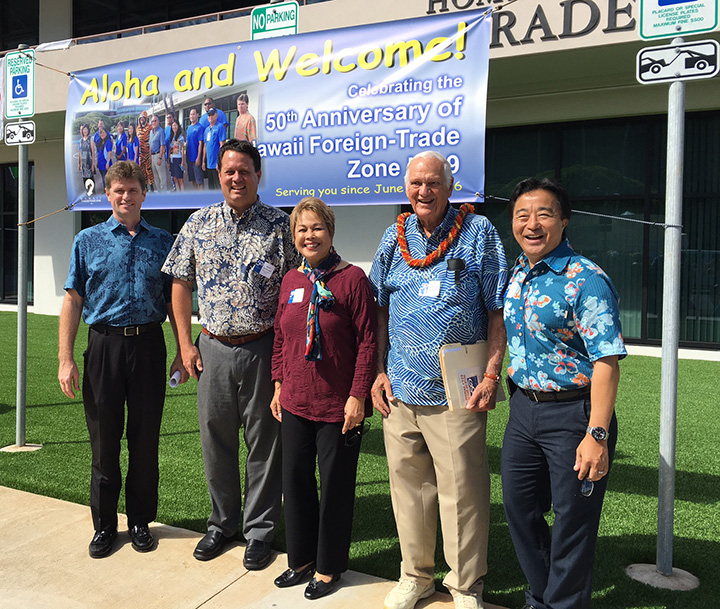 The “Hawaii FTZ9: 50 Years and Beyond” event showcased 50 commemorative photos to highlight the 50 years of operations in the State of Hawaii. As part of the celebration, participants contributed items to be placed in a time capsule, which will be opened in 10 years.

“This is a milestone event in Foreign-Trade Zone No. 9’s history,” said Gov. David Ige. “From the early days through today, Hawaii has relied on its ability to effectively conduct commerce worldwide. When both import and export activity expands, the economy thrives, investment grows, and overall economic activity increases.”

Governor John A. Burns initiated the state’s interest in the FTZ program, which was established by the U.S. Department of Commerce in 1934.

On June 15, 1966, the Hawaii FTZ, under the leadership of then-Gov. John A. Burns and the zone’s first Administrator, Homer A. Maxey, Jr., began operations through a grant of authority by the U.S. Department of Commerce as the ninth Foreign-Trade Zone established in the nation.

“The FTZ program supports local companies in the food, retail, and energy sectors of the state’s economy by lowering the costs of doing business,” said DBEDT Director Luis P. Salaveria. “Moving forward, FTZ9 will play a key role in the advancement of international trade in the Asia-Pacific region.”

FTZ9 has office tenants and a mix of users from international businesses, customs brokers, shipping and logistics companies, maritime operations, the U.S. Department of Commerce Commercial Service and U.S. Customs and Border Protection.

David Sikkink, FTZ9’s fifth and current Administrator said, “Our Pier 2 facility serves as the ‘Hub of International Trade’ in Hawaii. Over our 50 year history, we have built a strong program on private-public partnerships, trade resource development, and facilities enhancements. We look forward to supporting Hawaii’s import and export sector for the next 50 years and beyond.”

Aside from visitor spending, Hawaii exports in the past year alone have generated more than $1.65 billion in sales, $392 million in household income, $69 million in state sales taxes, and have impacted more than 9,460 jobs in the state.

A Foreign-Trade Zone is a secure area located at or near a U.S. port of entry and is under the supervision of U.S. Customs and Border Protection. In an FTZ, commercial merchandise receives the same treatment as if it were outside the commerce of the United States. These areas designated by the federal government allow for the import, handling, storage, manipulation, and manufacturing of goods and receive the same tax and tariff treatment by the United States as if they were in a foreign country. This tax and tariff relief lowers the cost of U.S.-based companies engaged in international trade and thereby retains capital investment and employment as a result of these operations. Currently, there are over 260 Foreign Trade Zones nationwide with at least one in every state and Puerto Rico.

Since beginning operations at Pier 39 in 1966, FTZ9 moved its headquarters to Pier 2 in 1982 where it also operates a General Purpose FTZ warehouse which services the general public.