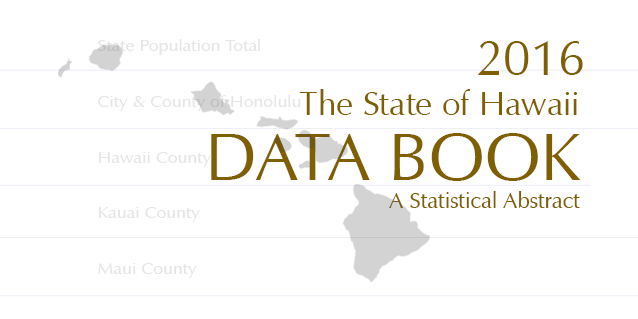 HONOLULU—The Department of Business, Economic Development and Tourism (DBEDT) today released the 2016 edition of the “State of Hawaii Data Book.”

The book is in electronic form and is available on the DBEDT website at: dbedt.hawaii.gov/economic/databook and may be downloaded in whole or in part as either PDF or Excel files.

The state’s Data Book is the most comprehensive statistical book about Hawaii in a single compilation. With more than 800 data tables, classified into 24 sections, it covers a broad range of statistical information in areas such as population, education, environment, economics, energy, business enterprises, government, tourism and transportation.

“The Data Book has been around for 48 years and provides useful information related to Hawaii in a variety of areas including research, business planning, and policy design,” said DBEDT Director Luis P. Salaveria. “The Data Book is the most popular item on the DBEDT website.”

“We understand that data are important in personal and business planning, so we try to provide the data to the public in a timely, accurate, and friendly way since,” said State Economist Dr. Eugene Tian. “Though we compile the book around the middle of August every year, we update the tables year round. We also try to add any valuable data in the book when they become available and abolish data when obsolete. One of the tables we added this year is the federal government grants to state government, and note that most of the grants were allocated based on population and the numbers presented in Table 9.61.”

Some of the interesting data in this newest edition show that:

DBEDT’s Research and Economic Analysis Division (READ) also maintains the historical series of tables and updates the data continuously throughout the year. The historical series and the update can also be found on the DBEDT website at dbedt.hawaii.gov/economic/databook.