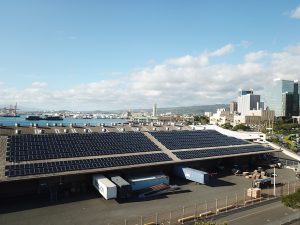 Hawaii Foreign-Trade Zone No. 9 completes installation of its long-planned photovoltaic system at its Pier 2 facility.

HONOLULU—The Department of Business, Economic Development and Tourism (DBEDT) announced that its Foreign-Trade Zone division (FTZ) has completed the installation of its long-planned photovoltaic system at its Pier 2 facility.

The photovoltaic system, completed in December, consists of 1,070 panels, which produces 300 kW AC, with an annual output of nearly 549,000 kWh. This system is considered to be the largest solar energy system in the core downtown business district and produces nearly all of the FTZ’s daily energy needs.

“We’re making great strides toward meeting our 100 percent renewable energy goals, and this photovoltaic energy system is another example of the state’s commitment to these goals,” said Gov. David Ige.

“The Foreign-Trade Zone’s Pier 2 location is an ideal spot for this type of project, said DBEDT Director Luis P. Salaveria. “Thoughtful energy planning and policy requires a thorough understanding of the relative costs of utility- and residential-scale solar PV, which will help us achieve our energy goals.”

“I’m very pleased to see this project finally come to fruition,” said Foreign-Trade Zone Administrator David Sikkink. “A third of our operating budget was spent on energy to power our facility. It will be a significant decrease in cost for us, which will be a relief to our program’s budget. We can now be able to focus those funds on enhancing the program and furthering our international trade objectives for the state.”

Hawaii State Energy Office Administrator Carilyn O. Shon added, “Reaching Hawaii’s clean energy goals will require a diversified portfolio of renewable energy technologies, and commercial-scale PV projects like this are an important part of that mix. The Foreign Trade Zone should be commended for its effort to bring this important project online.”

In the future, FTZ plans to expand the system to include energy storage and production of other forms of energy, such as hydrogen, which could be used to fuel their fleet of fork lifts.

The Hawaii Foreign-Trade Zone #9, located at Pier 2 in Honolulu Harbor, is a division of the State of Hawaii DBEDT office and supports the expansion of import/export and manufacturing in Hawai‘i as well as the Maritime industry. The Foreign-Trade Zone strives to support the advancement of Hawaii’s business through strong participation in public-private partnerships.