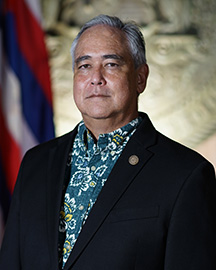 Mike McCartney was born and raised in Kahaluu, Oahu. He is a graduate of Castle High School and Pacific University in Oregon. McCartney is married to Candace Furubayashi and has three children, Bricen, Jaren and Lauren.

Mike McCartney is currently the Director of the Department of Business, Economic Development and Tourism (DBEDT). Prior to joining DBEDT, he was the Chief of Staff for the Office of the Governor, appointed by Governor David Ige in December 2014.

He was the past President and Chief Executive Officer of the Hawaii Tourism Authority (HTA), the state’s tourism agency. Since joining the HTA in 2009, he has lead the agency to emerge from tough economic times for Hawaii’s visitor industry. In 2013, Hawaii’s tourism economy provided $14.5 billion in visitor spending, contributing $1.6 billion in state tax revenue, and supported 175,000 jobs.

McCartney currently serves on the board of the Carole Kai Charities and the Great Aloha Run, Winners at Work and volunteers for the Hokulea Worldwide Voyage.