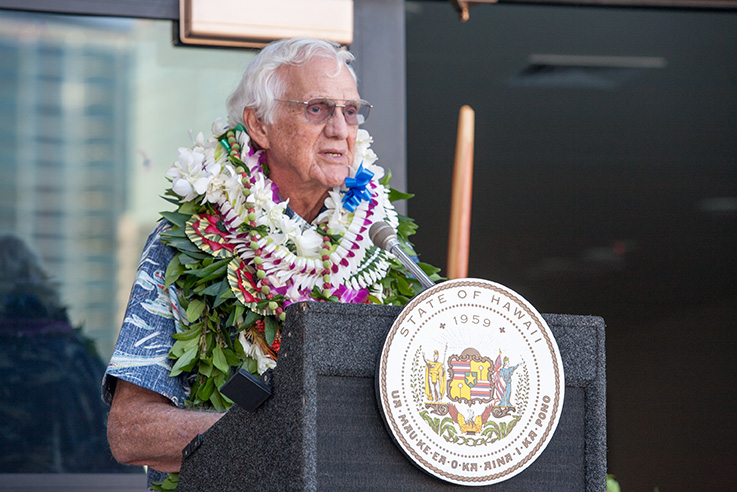 HONOLULU—It is with profound sadness that Foreign-Trade Zone No. 9 and the Department of Business, Economic Development & Tourism announced the passing of Homer A. Maxey, Jr. Mr. Maxey passed away at his home in Kailua on Wednesday, April 14, at the age of 92 with his wife, Mahina, by his side.

Governor David Ige said, “Homer Maxey helped build Hawaii’s future at a critical point as the state pivoted toward an expansion of its economic base. His work in the maritime and international trade industries was immeasurable.”

Homer Maxey was instrumental in the formation of the Foreign-Trade Zone (FTZ) program in Hawaii and served as Foreign-Trade Zone No. 9’s first Administrator from 1966 until he retired in 1993. Mr. Maxey was a pioneer in the industry, establishing the first oil refinery in the nation to use FTZ procedures in their operations; the first flower mill operations to utilize FTZ for export markets, and the first garment manufacturing operation for export markets. Each of these firsts led to the industrialization and expansion of Hawaii’s economy. Through his work, Homer and FTZ9 were the first Foreign-Trade Zone in the U.S. to receive the President’s “E” Award for Excellence in Exporting.

“When Mr. Maxey started with FTZ9, there were only eight other Foreign-Trade Zones in the U.S. Currently, there are 294 approved Zones and 857 Subzones nationwide. Through his visionary work and dedication to the Foreign-Trade Zone program, he created an indelible legacy not only for local industry, but one that is recognized nationally,” said David Sikkink, FTZ9’s current Administrator. “Homer exemplified the Aloha Spirit and will be sorely missed.”

Mr. Maxey was also one of the ten founders of the National Association of Foreign-Trade Zones (NAFTZ) and served as its first president from 1973 to 1975. In 2020, the NAFTZ established the first ever Homer A. Maxey Advocacy Award given to the industry professional who is recognized nationally for their work on behalf of the Association and was also conferred the Lifetime Achievement Award by the National Association of Foreign-Trade Zones for his enduring involvement and service to the Association.

FTZ9 extends its deepest condolences to the Homer Maxey family.

About Foreign-Trade Zone No. 9 (FTZ9)
FTZ9 is a federal program administered by a state agency under the Department of Business, Economic Development & Tourism, with the mission of helping Hawaii companies import as efficiently as possible. FTZ9, located at Pier 2 between downtown Honolulu and Kakaako, offers secure and economical warehousing and inventory control. Importers can take advantage of the FTZ9 to defer, reduce, or even eliminate their import duties. FTZ9 is Hawaii’s one-stop-shop for international trade, housing the majority of the State’s customs brokers as well as shipping logistics firms and other international trade support organizations. U.S. Foreign-Trade Zones allow companies to take advantage of Federal import and export benefits to compete on a level playing field with foreign manufacturers.