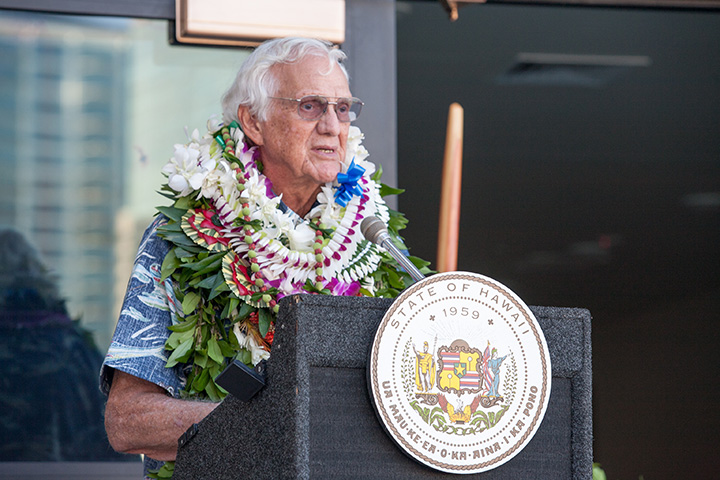 HONOLULU—Hawaii’s first Foreign-Trade Zone administrator, Homer A. Maxey, is being honored by the National Association of Foreign-Trade Zones (NAFTZ) with its first ever, annual award inaugurated in his name. The 2020 Homer Maxey Award will be presented in Washington, D.C. this February and given to the trade professional who has made outstanding contributions and provided significant support to advocacy in the industry.

Maxey led the establishment of Hawaii’s Foreign-Trade Zone No. 9 (FTZ9) in 1966 and the NAFTZ in 1973. He was elected as the association’s first president and is an honorary life member.

“Homer Maxey was an active and passionate advocate for local and federal policy change that helped to make the foreign-trade zone program the success it is today for the nation’s import-export businesses and manufacturers”, said Mike McCartney, director of the Department of Business, Economic Development and Tourism.

“I can’t think of a more deserving individual for this award to be named after than Homer Maxey,” said David Sikkink, the current administrator of FTZ9. “Homer has been a lifelong advocate of the program and his work and accomplishments are a testament to his dedication to advance the program.”

Through Maxey’s pioneering work, including establishing the first oil refinery in the nation to be located in a Foreign-Trade Zone, the first flour mill to use FTZ procedures to blend bakery mixes for export markets, and the first food processing and canning facility at Dole Pineapple to operate under FTZ procedures; Hawaii’s FTZ9 is one of the oldest and most respected zones in the nation. Under Maxey’s lead, FTZ9 became the first zone in the nation to receive the prestigious President’s “E” Award for excellence in export service. FTZ9 still serves more companies than any other FTZ in the country.

“For some time, the NAFTZ Board has been considering ideas for honoring Homer’s considerable contributions to the FTZ program and the NAFTZ. We realized the important role Homer had played of many years as an advocate for the FTZ program and stakeholders, “said Erik Autor, president of the National Association of Foreign-Trade Zones. “We are very pleased to provide a continuing way to recognize and honor Homer’s advocacy role, which was critical in achieving many of the milestone reforms that built the FTZ program into what it is today.”

This is NAFTZ’s first award of its kind, to be awarded on a national basis, that recognizes FTZ professionals who made outstanding contributions and provided significant support to NAFTZ advocacy.

Mr. Maxey is a Kauai native and retired as administrator of the Hawaii Foreign-Trade Zone No. 9 in 1993. He currently lives with his wife, Mahina, on the island of Oahu.

About Foreign-Trade Zone No. 9 (FTZ9)
FTZ9 is a federal program administered by a state agency under the Department of Business, Economic Development, and Tourism, with the mission of helping Hawaii companies import as efficiently as possible. FTZ9, located at Pier 2 between downtown Honolulu and Kakaako, offers secure and economical warehousing and inventory control. Importers can take advantage of the FTZ9 to defer, reduce, or even eliminate their import duties. FTZ9 is Hawaii’s one-stop-shop for international trade, housing the majority of the state’s customs brokers as well as shipping logistics firms, and other international trade support organizations. U.S. Foreign-Trade Zones allow companies to take advantage of Federal import and export benefits to compete on a level playing field with foreign manufacturers.