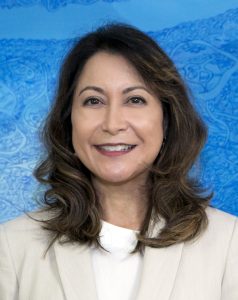 The HHFDC Board of Directors appointed Denise Iseri-Matsubara as its executive director in May 2020.

Before joining  HHFDC, Iseri-Matsubara served as the Executive Director of the Office of Community Services where she was responsible for administering millions of dollars in federal and state grants-in-aid programs to assist Hawaii’s low income, immigrant and refugee populations.

From 2014 to 2018, she was a Senior Special Assistant to the Governor during which time she  worked with Gov. Ige to establish a housing stakeholder working group to work on administrative processes and state policies aimed at increasing the development of affordable housing for the people of Hawaii.

While with the Office of the Governor, Iseri-Matsubara also worked closely with OHA, the Department of Land and Natural Resources, and the National Oceanic and Atmospheric Administration to help OHA achieve co-trustee status in the management of the Papahānaumokuākea Marine National Monument.

She was appointed by Gov. Ige to the HHFDC board and also served as the Chief of Staff’s designee on the Hawaii Interagency Council for Transit-Oriented Development.

Iseri-Matsubara has over a decade of management and state administration experience, and has held various positions including  Executive Assistant to the Chancellor at the University of Hawaii at West Oahu, Community Relations Director at the Office of Hawaiian Affairs, and Director of Government Relations at the Hawaiian Electric Company.